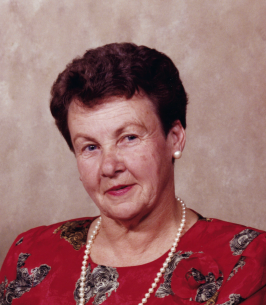 Blanche was an active person all her healthy years in Renfrew while living on Aberdeen Street. She has been slowly leaving us over the past ten years as a result of a stroke that affected her memory. Blanche was born September 21st, 1929, and was married in 1948 to the late Kenneth MacPherson, who passed in April 1990.
Her life-long passion was fiddle music and dancing, especially to anything Scottish or Irish. Blanche was a member of Ladies Orange Benevolent Association of Douglas for over five decades. She worked for many years in the cafeteria at Renfrew Victoria Hospital.
She is survived by her son and his partner of 50 plus years - Glenn and Judith of Oakville, grandchildren Laurie and Jennifer, plus great grandchildren Kenneth and Jessica. Her late grandson Jeffrey will be welcoming her into eternity.
Blanche for the past seven plus years has been living in Oakville at Wyndham Manor where she was cared for in an exemplary and personalized way. In spite her memory issues, they all liked the sparks on occasion of her sense of humour. She awoke on the morning of June 15th and then passed peacefully to be with her Lord and Saviour in a healthful state.
She has many caring and loving nieces and nephews, as well as many grand nieces and nephews throughout the Ottawa Valley and beyond. She loved each of them in unique and special ways, and when healthy, was always up to date on their personal lives and the lives of their families. She was the best source of information for the history of all the related families who married who and when – usually able to connect everyone extended out to the fourth cousin level.
Her parents were the Late George Aiken and Edith Ann Watson of Scotch Bush. She was predeceased by her five sisters and three brothers and their spouses. There will be quite a family picnic in heaven!
Blanche loved nature and could be regularly seen going for country drives in her little red truck. She was always checking on the wildlife population and what wildflowers were in bloom.
Blanche's final care has been entrusted to Zohr Family Funeral Home, Renfrew. A family service will be held at St. Paul’s Anglican Church on Monday June 20th, with interment to follow at Rosebank Cemetery In lieu of flowers, she would appreciate your support of the Canadian Cancer Society, Renfrew Victoria Hospital Foundation, St Paul’s Anglican Church or any charity of your choice. Tributes, condolences and donations can be made online at www.zohrfuneralhome.com