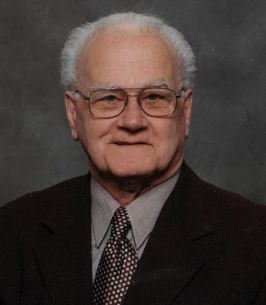 It is with sadness, but also joy, Doug spread his wings & passed peacefully with his girls by his side at his home, at the age of 96 years. Doug leaves an extended family to celebrate his life. His two daughters; Karen Verch (late Alan) and Kimberley Clark (Ken McKinney), his four grandchildren; Jocelyn Quade (Rocky), Joel Meringer, Vincent Petrangelo and Alyssa Petrangelo, as well as his two great grandchildren; Alexander Meringer Quade and Kalista Meringer-O'Brien. He was a special Poppa to many more.

Doug was born a 1lb premie at Canoe Lake Station, Algonquin Park. He was the fourth child of George and Winnifred (Webb) Clark. His survival was a miracle. Doug's working career took him all over Canada. He worked from an early age in Arnprior, at Gilles Lumber, Kenwood Mills and the Airport kitchen. At the age of 17, he joined the army, training at Camp Borden Tank Division. He served at Schreiber, Ontario and Seebe, Alberta and Northwest Territories Radio Systems. Later, he drove street cars in Edmonton, long haul transport trucks from Toronto to Vancouver for many years. He then worked for 20 years at General Motors Oshawa Truck Plant, retiring in 1988. Moving to Foymount, in 1991 he met many people enjoying community & church life, his woodworking shop and cottage life. He loved fishing, telling stories & always had a joke. Our family was blessed beyond measure with the most loving, caring man - that 1lb premie - God had a long life plan for. We were truly blessed. Rest in God's peaceful sleep daddy 'til we are together again. Prayers were given by his Pastor.

Many thanks to his Barry's Bay Healthcare team, Dr. Jason Malinowski, Dylaina and Madawaska Valley Hospice, Champlain Home Care and Bayshore Nurses and PSW‘s. A special thank you to his granddaughter and nurse Jocelyn Quade, who attended his every need until his last breath.

Professional arrangements have been entrusted to Zohr Family Funeral Home, Killaloe. Cremation has taken place and a celebration of life will take place at a later date.
Those desiring may make donations in memory of Douglas to either, Madawaska Valley Hospice (St. Francis Valley Healthcare Foundation, Barry’s Bay), Salem Evangelical Missionary Church, Augsburg or the Lung Association online at www.zohrfuneralhome.com