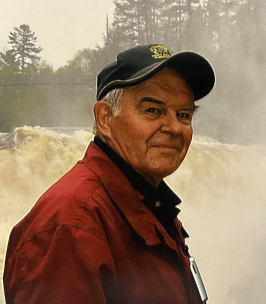 Harvey Garth Pilgrim was born Sept.17, 1936, first born son of Harvey and Ellen Pilgrim. He grew up on their farm on the Blind line, along with his siblings Thelma, David, Faith, and Beatty. He enjoyed his youth as an active, hard working, outdoorsy boy. On August 22, 1959, at 22 years old, he married the love of his life, Evelyn Gilmour. Harvey was a man of strong faith in the Lord, and together, he and Evelyn displayed faithful commitment to the Lord all of their lives. They established their home at their farm on Queen’s Line, and have enjoyed a strong, faithful, loving marriage for over 62 years.
In 1961, they welcomed their first born daughter, Diane, and their twins Doug and Elaine in 1963. Harvey and Evelyn raised their children on the farm with a life focused on faith, family, hard work, and kindness to others. He was a loving, involved father to his children, a kind and generous neighbour. He was a well respected man in his work as a methods engineer at Haley Industries for many years.
Through the years, children grew, got married, and brought grandchildren into the family. Harvey was a loving and involved grandpa to Sarah, Beth, Ellen, David, Cole, Joe and Scott. In time, grandchildren also grew, got married, and have given Harvey and Evelyn 15 great-grandchildren to love and enjoy. Many years were spent working and playing around the farm, and the whole family is grateful for years of happy memories enjoyed together. There were also times of sorrow and loss, as Harvey is predeceased by his dear brother David (in 1987) and his beloved daughter Diane (in 2005).
Harvey retired from his work at Haley’s in 1998, but continued to serve as a consultant for 5 more years, making frequent trips to Arizona to assist in work there. He enjoyed his beef cattle, and established a premier charolais herd throughout the years. In 2020, the cattle herd was sold as life on the farm grew quieter. Throughout his life, Harvey enjoyed sports such as ball, hockey and golf, and sports was an opportunity to create more special memories, especially with his brother Beatty and his son Doug.
During these last few months of illness, Harvey was surrounded by the love of family, and supported by the kindness of friends and neighbours. He spent much time in prayer, thoughtful conversation, and enjoying old hymns of the faith. He was sure of his future, resting in the knowledge that his Saviour and Lord, Jesus Christ, had provided salvation and a sure future in Heaven. He was grateful to know that we who were left behind would not need to mourn without hope, but would be able to rest in the knowledge of a coming future together in glory. On the morning of June 25, with his beloved wife holding his hand, and his family nearby, Harvey passed quietly from this body to be present with His Lord. We who are still here rest in the goodness of God,and in the knowledge that Harvey is now free of suffering and pain, rejoicing with His Lord. We thank all who have been so kind over these past few months, as you have made this journey more bearable with your generosity and support.