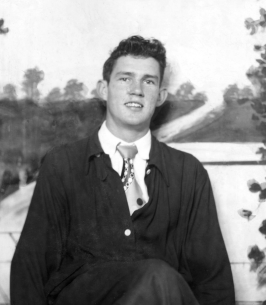 On May 16, 2022 Howard Boland, a former resident of Eganville passed from this world after a long life at the age of 88. Most of his life was spent in the Ottawa Valley where family roots run deep. His various careers included ranching out West, boxing, mining in Elliot Lake, to working as chief purchasing agent at Renfrew Aircraft, Storwall International and KI Furniture, respectively. Anyone who met Howard knew that first and foremost he was a proud beef farmer of registered Hereford cattle. He was happy to be the fourth generation who farmed the original Boland homestead (Donegal) outside of Eganville, Ontario. Life was at its best for Howard when he retired in his late 50s to continue farming, full-time, until his mid-70s when the family farm was sold.
Howard was the son of George and Kathleen Boland; he was raised in a large family of nine children – Helena (deceased) Billy, Geraldine, Mae, Tom (deceased), Colleen, Kitty, and Lorie. He married his first wife Teresa Dunnigan (deceased) in 1953 and is survived by their daughters, Kae, Mary (Michael), Muggsie and Irene (Mark) and his grandsons George and Isaac. He is also survived by his second wife, of 38 years, Linda Resmer and his stepchildren Michael (Arnita) Tammy (Jim), Laurie, and step-grandchildren Jeremy (Kalah), Brooke, Kyle, Emily (deceased), Travis, Anthony-AJ (Candace) and great step-grandchildren Temperance, Sutton, Adelaide, Adalyn, and Jackson.

Howard's final care has been entrusted to Zohr Family Funeral Home, Eganville where private family services will be held. In lieu of flowers, please consider a donation in Howard’s memory to the Society of St. Vincent de Paul, Pembroke. Tributes, condolences and donations may be made online at www.zohrfuneralhome.com