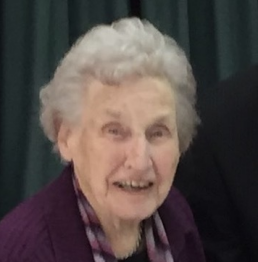 Kathryn Mary Oostrom (Donnelly) passed away peacefully at the age of 97 on the 29th of October 2022. Beloved wife of the late Adrian Oostrom.
Survived by sisters Eileen Donnelly Casey (late Ed) of Toronto and Margie McIntyre (late Leo) of Arnprior, and Judy Montroy, best friend of her brother late Lorne of North Bay. Also survived by members of the Oostrom family.
Predeceased by parents James and Mary Donnelly, and siblings Cecil (late Doris), Jimmy, Bobbie (late Theresa), Mary (late Lawrence Donegan), Leonard (late Doris), Jackie, Lucretia and Lorne (Judy).
She was dearly loved and held a special place in her heart for all of her nieces and nephews as well as great nieces and great nephews. She was special Auntie Kathryn to Joann McNeil. Kathryn was very thankful for the special care provided by her family and friends in her later years.
Kathryn and Adrian were proud godparents to her brother Lorne Donnelly and nephews Sean Donnelly and Doug McIntyre.
Kathryn was born in Pembroke and lived her younger years in Mackey. She moved to Eganville as a teenager. Kathryn was well known in the community being employed by several local businesses. She met Adrian and they were married in 1967. Kathryn was an avid athlete and enjoyed baseball and curling. She was a valued member of the CWL at St. James the Less, and she and Adrian enjoyed attending church suppers throughout the Valley. Kathryn loved her home on Alice Street and had great caring neighbours in Gord and Marilyn Panagapko.
Visitation will be held at Zohr Family Funeral Home, Eganville on Monday, November 7, 2022 from 6-8 pm. Mass of Christian Burial will be held on Tuesday, November 8, 2022 at 11am at St. James the Less Catholic Church followed by interment in the parish cemetery.
Donations may be made in her honour to Pembroke Regional Hospital Foundation or a charity of your choice. Tributes, condolences and donations may be made online at www.zohrfuneralhome.com