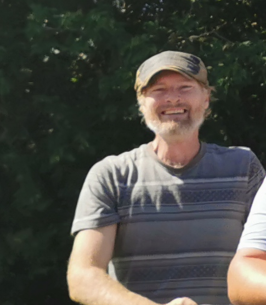 Mark Stephen McGuire was born October 12, 1976, a fierce and caring soul. His last breaths on October 30, 2022 were spent trying to save another from the clutches of an icy river. He died just months after the love of his life, Kim Maynes, whom he nursed in the final years of her life as she battled cancer. Their marital bond was built around a common love for nature, the natural, joy, and human compassion.

Throughout his life, Mark sought answers about his biological mother about whom he ended up knowing little. Her gift at a very young age was to Mark’s parents, Judith Schiemann and Stephen McGuire, and later their respective spouses, Joseph Winowich and Veronica (Vera) McGuire. Mark was blessed with grandparents whose love knew no bounds and whose memory beat strongly in his heart, Nan (Nora McGuire –nee Cox), and Gertrude and Roy Schiemann. Blissful summers were spent with those grandparents on the shores and in the sparkling waters of Nan’s Golden Lake cottage, his most cherished place and the place he sought refuge. There, Mark fished, laughed, wrestled, swam, jumped puddles, caught frogs and immersed himself in life with his admiring brothers Matthew (Monika Cywinska) and Michael (Shannon McGuire –nee Donaldson), step-brothers Ryan and Paul Heritage, their cousins and quasi-cousins, and under the watchful eyes of aunts and uncles.

Mark excelled as an outdoorsman, even from a young age when he achieved the highest scouting level of Chief Scout in Whitby, where he was raised and attended Henry Street High School. “Uncle Mark Mark Mark” was generous and patient with teaching his nieces (Kierra and Evelyn) and nephews (Andrew, Matthew, Lukas, Brandon and Oliver) the skills he acquired in the woods and on the streets. For countless hours Mark would crouch down to carefully coach them in throwing a football, aiming an air rifle, baiting a hook, cutting down trees, and plotting how to cultivate what nature had to offer. Much time was also spent with his family and friends, and his faithful and companion Wally, sharing stories and trading witty barbs: Some understand capable keen adventurous dogs inducing caring kindness.

Mark was always there when he was needed and quick with a smile. His generosity was well known to his friends and the community in which he lived, ready with food and care to those in need.

Among those in his community was a close friend Jeff “Jefe” Barker, who has stood by him, particularly as he grieved for Kim, and who led the charge to find him when he didn’t turn back up at the dock.

Mark fought to overcome tremendously challenging life circumstances. He persevered and found joy in daily life. To honour Mark, we ask that instead of any donation of money, you find time to devote to joy, and to persevere with those in your life who are called to meet similar challenges.

Final arrangements entrusted to Zohr Family Funeral Home, Eganville, where cremation will take place. Mark was always quick to rise to a planned or impromptu family event. A celebration of life bonfire will be held beginning at 4:20 p.m. on Saturday, November 5th at 170 John Street in Eganville. We invite you to share your memories and pictures at that celebration and on his online memorial page at www.zohrfuneralhome.com