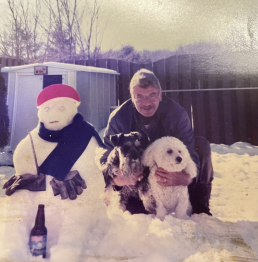 Passed away peacefully at his home with his wife Barbara Shushack at his side. Paul grew up in London, Ontario where he attended Broughdale Public School, Medway Highschool and London Teacher's College. As well, he furthered his education at Western University, York University, McMaster University (degree in Geography and Anthropology) Ottawa University and many ministry of education related courses. In 1973 he moved to Renfrew County where he served as Vice Principal and then Principal in 4 different schools. After 34 years of teaching he was finally able to "get out of school" and retired in 1996.

Paul is predeceased by his father Bill, mother Mary and big brother Andy (Barb). He leaves behind his brother David (Barb) and sister Barb (the late John Crawford). Paul also has 2 children Peter and Jenn and 2 grandchildren Zachary and Alexander Wroe.

Paul is finally able to breathe again and free of tubes. Rest in peace. Thank you to Bayshore Home Healthcare, especially Mike Wise and Sonja Boucher, as well as community paramedic Sean.

Professional arrangements entrusted to Zohr Family Funeral Home, Eganville. As per Paul's wishes, cremation has taken place and there will be no funeral service. If so desired, memorial donations may be made to a charity of your choice in his name. Tributes, condolences and donations may be made online at www.zohrfuneralhome.com