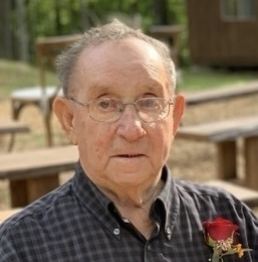 Passed suddenly at home on July 7, 2022 in his 87th year. Beloved husband of 60 years to Aurelia Hanniman (nee Kelly). Predeceased by his parents Frank and Anna Mary and siblings Willie, Cecil, Mayme and Shirley. Survived by his sisters Viola Merchand and Joan Hanniman.
Dear father of Stephen Hanniman (Sylvie), Laurie Hanniman, Lynn Gavin (Paul), Lisa Dick (Terry), Joanne Turnbull (Scott) and Pauline Hanniman.
Loving grandfather of Frank (Morgan), Victoria (Chloe), Amanda, Michael (Andrea), Greg (Carly), Adam (Megan), Kacey (Shawn), Jenny (Dustin), Nolan and Brady. Great Grandfather "Poppa" to seven little ones.
Bob was born and lived his whole life in Dacre. He spent most of that time working on the highways and looking after the farm.
Bob married Aurelia in 1961 and built their family home over the hill from his parent’s farm. With six children in tow, life was busy keeping the wood shed full, plowing the snow, tending to the garden and making sure all the sap was gathered.
Bob was always willing to lend a hand to friends and neighbours often on his old tractor - which he would be proud is still running today.
Bob was always proud of his children and grandchildren and will be sorely missed by all.
Friends may call at Zohr Family Funeral Home, Eganville on Sunday from 2-4 & 6-8pm. Mass of Christian Burial will be held on Monday July 11, 2022 at St. James the Less Catholic Church, Eganville at 11am. Interment will follow at St. Joseph's Cemetery, on the Opeongo.
Those desiring to make donations in memory of Bob can make them to either the University of Ottawa Heart institute or the DACA centre.
Condolences, tributes and donations can be made at www.zohrfuneralhome.com