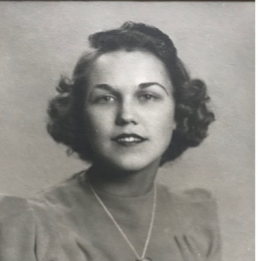 It is with sadness that we announce the passing of Ruby Mabel Iliffe (nee Hill). She died peacefully in her 102nd year on November 16, 2022 at Groves Park Lodge, Renfrew, Ontario. Beloved wife of the late Gilbert Iliffe and mother of Karen Abbott (late Gray) of Renfrew and Nancy Ford (Bill) of Vancouver. She will be missed by her dear nephew Mike Iliffe (Carol) of Calgary. Also saddened by her passing are her grandchildren Heather (Len), Stuart, Sarah and Daniel, as well as five great grandchildren Owyn, Emma Soleil, Claire, Meaghan and Thomas.

Born in Newcastle (now Miramichi) NB on December 8, 1920, Ruby moved to Montreal when she was 18 years old to find work where she met her husband-to-be. They lived, raised a family and were extremely active for many years in the Dorval community and St Columba-By-The-Lake Presbyterian Church in Point Claire. About ten years ago they relocated to Ottawa to be closer to family and then moved to Renfrew seven years ago were they resided until their death. Ruby was predeceased by her parents, sister Jean, and brothers Edwin, Billy and Harry.

Professional arrangements entrusted to Zohr Family Funeral Home, Renfrew. There will be a private family ceremony of Christian Burial in the Spring. We thank the wonderful staff at Groves Park Lodge for the outstanding care Ruby received. Any donations made in lieu of flowers, the family would appreciate them being sent to Groves Park Lodge at 470 Raglan St N, Renfrew, ON K7V. Tributes, condolences and donations may be made online at www.zohrfuneralhome.com