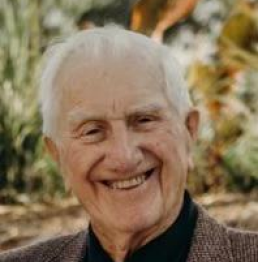 It is with great sadness that Russell’s family announces his passing peacefully on October 9, 2022 with
family by his side.

Russell (aka ‘Moose’) was born in Halfway Cove, N.S. and lived in Montreal, QC, Westville, N.S. and
Calabogie, ON. He was an employee of Shell Canada in Montreal for 22 years before retiring and moving
back to Nova Scotia in 1979. Dad was an active member of St. Bee’s Church in Westville, an avid card
player, golfer, fisherman and a CFL football and NHL hockey fan. He spent many hours building deacon’s
benches and model size boats for many family members. He enjoyed music and listened to Heritage
Valley Radio Station everyday. Randomly, he would recite the lyrics of a Hank Williams’ song or the
words of a poem that he remembered from his school days. Dad’s last year with us was quite eventful
in that we celebrated his 100th birthday in Calabogie, he attended a family wedding, got to know his first
great-granddaughter, welcomed his first great-grandson and helped his two youngest grandsons move
into residence for their first year of college. Daily he went out for a walk and chatted with the
neighbours and was always up for a ride to Tim Horton’s – or anywhere!

Russell will be greatly missed by his four loving children, Cheryl (Al) of Calabogie, ON, Carol (Jack) of
Edmonton, AB, Terry (Kim) of Calabogie, ON and David (Michelle) of Georgetown, ON and beloved
grandchildren Clint, Scott, Coady (Brittany), Brad (Sherise), Kerry, Heather (Nate), Christine (Stu),
Cameron (Jaimie), Ryan, Zachary and Kyle and great-grandchildren, Quinn and Lincoln. Russell is also
survived by his brother-in-law Arthur of Montreal, QC and sisters-in-law Marion of New Glasgow and
Gloria of Antigonish and many nieces and nephews.

He will be dearly missed by his family and friends.

Professional arrangements entrusted to Zohr Family Funeral Home, Renfrew. As per Russell's wishes, cremation has taken place and a celebration of life and funeral arrangements will be made at a later date. Special thanks go to Renfrew Victoria Hospital for their kind, compassionate care. In lieu of flowers, donations made to the Renfrew Victoria Hospital, or the Canadian National Institute for the Blind would be greatly appreciated by the family. Tributes, condolences and donations may be made online at www.zohrfuneralhome.com