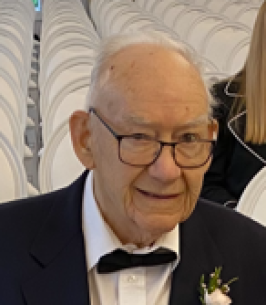 In loving memory of Willard Donald Brash, beloved husband of the late Doris Edna Eileen Brash (nee Scheer) of 65 years. He was a caring father, grandfather, great-grandfather, uncle and friend. He was in his 92nd year and passed away suddenly at his Supples Landing Retirement Home in Pembroke on October 3rd, 2022.

Willard was born in Pembroke and raised in Eganville. Predeceased by his parents Eleanor (nee Kerstin) and Walter Brash. Willard and Doris attended the same schools together since kindergarten and were baptized, confirmed, and married at Grace Lutheran Church. Willard started his career at the BMO branch in Eganville and progressed to Executive VP in Toronto. They moved to various cities throughout Canada such as Montreal, Toronto and Saskatoon; however, their home base was always Golden Lake. They spent 30 years plus, happily retired, at the lake and enjoyed vacationing during the winter in Mexico and Bahamas. The lake was always a place where family and friends were welcomed with open arms as they hosted many large gatherings. Willard loved the outdoors, hunting, fishing, gardening, and tending to his beautiful home on Golden Lake.

Thanks to the wonderful staff and friends at Supples Landing Retirement Home in Pembroke for the company and care over the last 3 years.

He was a very caring and thoughtful person and will be dearly missed.

Professional arrangements entrusted to Zohr Family Funeral Home, Eganville. Visitation will take place on Saturday, October 8th from 1:00-1:45pm at Zohr Family Funeral Home, Eganville followed by a funeral service at 2:00pm at Grace Lutheran Church, Eganville. Interment Grace Lutheran Cemetery. If so desired, memorial donations may be made to the Heart and Stroke Foundation or the Grace Lutheran Church in memory of Willard. Tributes, condolences and donations may be made online at www.zohrfuneralhome.com